The hit music video has shown all over the world, and is a consistent chart topper in Korea. Given the choice of ironic settings for scenes in the music video (kids pool playground, public exercise areas, underground parking lot) and some of the lyrics (downing coffee in "one shot") PSY seems to be playing on stereotypes of the idealized Gangnam Oppa. His message seems to be, even a guy like me can represent all the fun and great qualities you are looking for when dating a Gangnam Oppa. He highlights comedian Grasshopper and generally pokes fun at the Gangnam life and dating scene.

여자는? 어떻게 평가했다?
So, is his message about women as ironic?
It is unclear, although the representations of stereotypical men and men's lifestyle seem to be teasing or turn on their heads, women in the video tend to be back-up dancers.Aside from backup dancers, most women in the video are active in exercise, jogging outdoors, doing yoga outdoors, or participating in a tour.
At 1:39 PSY dances amidst a group of women doing yoga outdoors, their Cat-Cow poses are synced to pop to the beat, it could be poking fun at the popularity of yoga and weight loss, but it could just be sexualization of exercising women. The next scene, opening from 1:41 is the popular dance-off with Grasshopper, but these lyrics immediately follow the yoga scene:

LA Times coveragage puts their translation of the lyrics in the following context:


"A lady who looks conservative, but knows when to play hard, a lady who knows when to let her hair down, a lady who seems fragile, but sexy at the same time. I am a man's man, I may be conservative, yet I know when to have fun and play hard. A man who can go crazy when the time is right, a man who is bulging with social life instead of bulging with muscles. I am the man. You are beautiful, lovable, yes, you." And so on...
Essentially, the song is about finding the perfect girlfriend who knows when to be refined and when to get wild."

The core message seems to be that sensible personality and (muted? covered?) sex appeal should count rather baring all, a girlfriend should be quiet but able to let loose and be sexy, and sensible. These lyrics don't seem ironic in the context of the video. Rather, they conform very well to gendered expectations of women.

On the other hand, 4Minute's Hyuna dances in the subway adding to the irony of setting (see behavior of women on the subway criticized in the media here). In 2010, Hyuna experienced some controversy in the media when her dances were deemed inappropriate for minors. 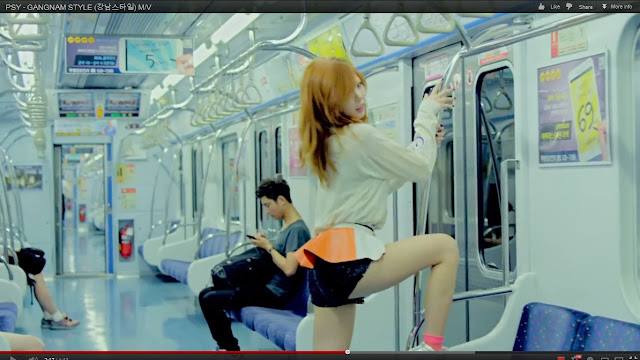 Better yet, in mid-September it seems there will be a sequel video and song from Hyuna's point of view, perhaps this will give us an opportunity to see what the message about women and dating will be.

2012.08.10 Update: I came across an interesting alternative idea that I had not yet considered. Is PSY's ironic portrayal of Gangnam Oppa also criticizing (the stereotypical Gangnam Oppa's) view of women and contradictory standards that women are held to when dating (to be covered up and sexy, to be quiet and wild)? This could be another possibility to evaluate the lyrics, particularly the set I quoted above, but I am still eager to see they Hyuna follow-up video from her perspective. 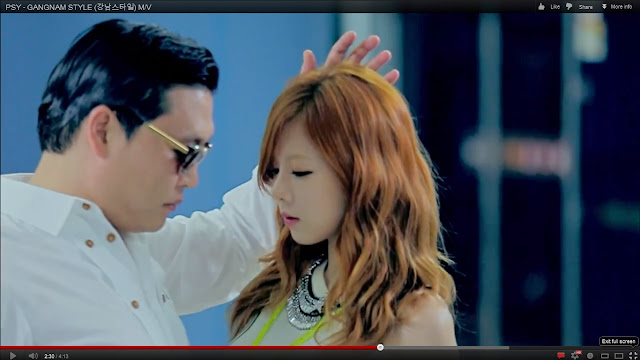