First, Kpop fan reactions:
Let's take a look at the reactions of some Kpop fans, and pay attention to what they notice about the video.

Kpopstarz describes the video:
"HyunA sings the song from a woman's point of view, claiming that Psy is 'just her style'. HyunA is wearing a cute yet sexy white dress as she dances a sexy dance instead of the usual 'horse-riding' move." [Emphasis added. Good description of the aegyo styling for Hyun-a in the video -CBM]

OhKpop has this to say:
"HyunA sings the song from a woman’s point of view, claiming that Psy is ‘just her style’. HyunA is wearing a cute yet sexy white dress as she dances a sexy dance instead of the usual ‘horse-riding’ move." [Emphasis added. Those living in Korea often refer to 'sexy dance' which highlights that the performance of 'sexy' contrasts everyday life, where women are typically expected to confirm to the 'sensible' behavior mocked in the first Psy video, however 'sexy dance' creates a sanctioned space for performance of sexuality - or consumption of sexuality. -CBM]

In this reaction video rimmygee asks "Is this a parody?" [YES~ Somebody else sees it! -CBM]
rimmygee notes Hyun-a's sparkly makeup, and comments that Psy is married (because of the sexualized dance?), and asks "Is she gonna perform, too?" [It seems that Hyun-a is performing a parody of women's aegyo cuteness norms throughout the video. -CBM] rimmygee notes how close Psy and Hyun-a dance, and seems a bit shocked. As the video ends she concludes, "Oh that's so cute." rimmygee adds, "Her voice isn't that annoying." I really appreciate rimmygee posting such an immediate response and for raising the question of parody. This reaction seems to center on Psy, so let's take a look at a reaction that centers on Hyun-a.


Finally, Bluuuue makes the following comment, more explicitly identifying the song and particularly Hyun-a's voice as parody. Posted by Bluuuue in [RANT] Hyuna and the "Oppa you're my style" MV...


"So i was surfing through some YG fanpages and forums in Vietnam. It turns out that they are all trippin' over this MV
I'm sorry if Psy picked Hyuna over your "much more beautiful YG unnies"
I'm sorry if her voice in the chorus is too pitchy and annoying, because it's Psy idea and for the entertaining purpose, which is the main goal of the song and Psy's strategy himself
I'm sorry if you think Psy and YG have lost their mind
I'm sorry if you think this version is not as good as the original. Everything, including films and MVs, work that way, you just can't expect anything high from a sequel.
I'm sorry if you are going apeshit because of a PARODY, yep, a PARODY" 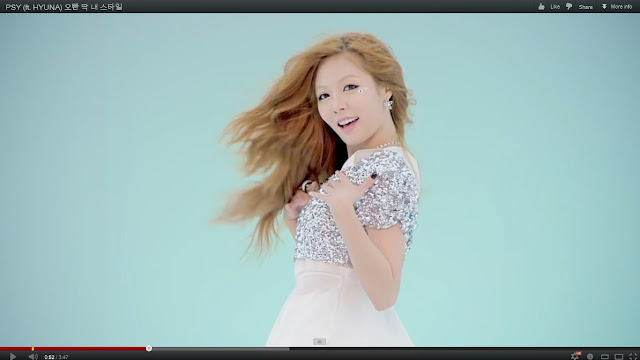 Now, some analysis on the image of women:
In  my view, Hyun-a's voice is is dripping with aegyo sweetness, and the reaction of viewers to her voice may show some subtle discontent or unease with this challenge to behavioral norms. Her poses tease the typical aegyo stances at 0:52, 1:09, 1:49, 2:33 2:43 (and others) and her dance replaces the horse riding move with Hyun-a;s pointing finger, poking fun at the stereotypical portrayal of women in media (especially advertising).


I think viewers regard Hyun-a as 'annoying' because Hyun-a overdoes the aegyo act just enough to satirize it. Finally, I love the final scene where they break the act and Hyun-a jumps on Psy's back and they laugh, the scene let's you in on the joke, and also breaks the aegyo act to confirm that this is parody.