In recent years, Korea's ultra low birth rate has been regarded as a social crisis, grabbing the headlines to appear in appear in articles ranging from future labor force forecasts to elder care, and from school closings to expensive childbirth recuperation vacation suite packages. However, South Korean birth rates have garnered government and media attention throughout modern Korean history. Information media from PSA-style short films, editorials, and news talk programs have likewise repeatedly put fertility and family in the headlines. In the Park Chung Hee era, family planning campaigns blamed high fertility for poverty in South Korea, convincing the public that patriotic pregnancy prevention was the means to save the nation. Birth control campaigns were born, the government funded vasectomies, and propaganda slogans persuaded parents that their children were taking rice out of their bowls with each additional hungry mouth. Decades later, the private companies and government fired pregnant women first, as part of Kim Young Sam’s response to the IMF crisis, citing the need to keep men at work to support the family.

This recent infographic lists South Korea as #10 (among the worst) in G20 countries: the worst and best for women. The reasons cited are: 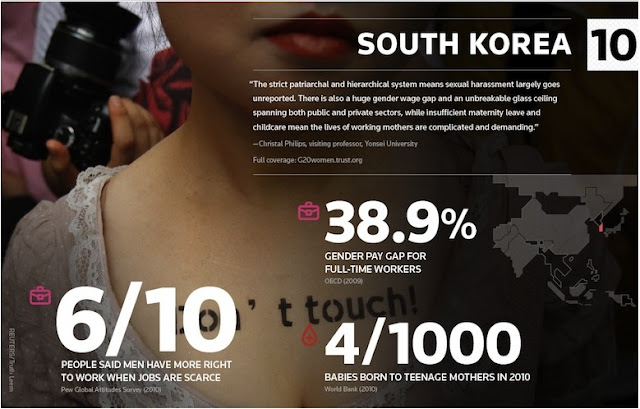 A majority of Koreans surveyed believe that men have more right to work, to economic security, than women. Phillips' quote captures it well, "The strict patriarchal and hierarchical system means sexual harassment largely goes unreported. There is also a huge gender wage gap and an unbreakable glass ceiling spanning both public and private sectors, while insufficient maternity leave and childcare mean the lives of working mothers are complicated and demanding."

From 2005 to 2010, the Korean government invested US$7 billion in programs to raise the total fertility rate to 1.6, mobilizing society to send young workers home early to foster couple intimacy, to offer subsidized housing to newlyweds, and to provide salary benefits for maternity and paternity leave, amongst other programs. Popular criticisms of the initiative centered on its de-emphasis on traditional family values and that it overlooked youth unemployment. Additionally, while the government and media have invested heavily in failed attempts to spur the birth rate (which reached only 1.24 last year, despite several astrologically lucky birth years), single and unwed mothers as a group have lacked resources to support their families. Thus, the Roh Moo-hyun and Lee Myung Bak administrations’ enforcement of the Saeromaji Plan 2010 (announced in 2006) fundamentally failed to achieve its goal to “foster a family friendly and gender-equal social structure and culture,” nor does it fully “utilize women’s working potential.” Without structural reform to the state welfare system or viable employment opportunities, and having failed to address the problem of equitable access to shelters for pregnant women estranged from their families, the government has fallen short of its objective to support unwed and single parent households.  Each year, the vast majority of children adopted overseas and domestically come from single parent homes. Despite the restriction of women rights’ by a ban on abortion, estimates indicate that upwards of 85 to 96% of unplanned pregnancies among women aged 18 to 34 result in abortion in South Korea. This essay will argue that mothers hoping to keep their children face significant political and social pressure and that a successful government initiative to increase the national birthrate should pay more attention to organizations like the Korean Unwed Mothers and Families Association (KUMFA), to revisions in policy, and to improving the social security net.

The event known as Single Mom’s Day is a collaboration between a number of organizations to support and celebrate single-parent families, and which may have been organized in response to government (domestic/overseas) adoption campaigns. Each year, Korean celebrities pose with children relinquished for adoption to promote adoption. As a consequence of conservative attitudes, single women may be estranged from their family during pregnancy and after childbirth. There is simultaneous social stigmatization of single parent families and concurrent unequal distribution of social welfare services. In the last decade alone, 17,869 South Korean children were adopted overseas, but many more children remain in foster care. Though the government has revised some of its policies surrounding adoption, for some time domestic adoptive families have received a monthly stipend double that of the stipend received by single parents hoping to keep their children. Even with revision, the 100,000 won stipend does not come close to matching the funds that might be available to single parents if the welfare criteria were revised to omit reporting the resources of other relatives (typically, the father and brothers). The status quo represents a significant intersection of political and social stigmatization as many single mothers may be both estranged from their families and simultaneously discriminated against by the government welfare system, often resulting in strong pressure for adoption or abortion among single women.

At the same time, insufficient government policy to address the declining birth rate continues to emphasize newlyweds, with support ranging from rental housing subsidies and child care funds to economic policies encouraging workers to leave the office early for “family promotion.” On November 15, 2011, a report published by the Korea Economic Development Institute (KDI) grabbed headlines in all the national newspapers. The report, authored by Kim Young Chul, analyzed the phenomenon of delayed marriage and the implications for the low-birth rate. The KDI report is skeptical that a government policy targeting married households alone will be sufficient to raise the birthrate. According to Kim, in the cultural context where marriage should be the premise for childbirth, late marriage and unmarried singles signify a dim future for Korea, as it shows that young people rationally decided to postpone marriage or simply to never marry. In a 2009 study by the Korean Health Preservation Institute of the self-reported reasons that singles were unable to get married, the most frequently reported factors interfering with marriage for women in their twenties were “wanting to focus on self-achievement” and that they did not marry because of their life goals (14.6%). Among women aged 30 to 34, this cohort emphasizes concern about being “tied down by marriage” (17.1%), not having found a good “match” (14.9%), “self-achievement” (9.0%) and “low salary” (9.0%) as the deterrents to marriage. Finally, women aged 35 to 44 say they are single because they “couldn’t find a good match” (28.3%), because of their “low salary” (12.9%), and because they simply “don’t think about getting married” and are discouraged from the ”marriage market” (10.6%). Attitudes toward marriage itself are shifting, as well. Given the current rise in the unmarried population, within the next 10 years unmarried (never married) individuals could easily surpass 20% of the adult population. Meanwhile, there is an apparent rise in the proportion of unwed mothers fighting to keep and raise their own children, though the birth rate among this population is also still quite low (at under 3%).

In sharp contrast with government policy toward newlyweds, the shelter facilities for single mothers estranged from family are insufficient to meet demand, and shelter staff are reported to discriminate against mothers in their thirties, who are perceived to be “too stubborn and difficult” and thus unattractive tenants. Furthermore, there is an obvious pressure inherent in the fact that numerous shelters are attached to and operated by adoption facilities that psychologically manipulate pregnant mothers with daily messages about the presumed benefits to their children of adoption. For further discussion about adoption, please see the extensive advocacy by organizations such as the Truth and Reconciliation Commission (TRACK) and Global Overseas Adoptee Link (GOAL) to bring attention to the real and experienced perspective of many adult adoptees who seek reform so that families are not separated.

In a paper presented to the 2011 GOAL International Adoption Studies Forum, researcher Han Boonyoung reported that recently approximately 55% of unwed teen mothers decided to keep their child but that nearly 90% of unwed mothers over age 30 decided to do so. While the birthrate outside marriage is very low in Korea, there are still a significant number of these types of births each year, and if marriage rates continue to decline, the rate of unwed births may rise over time. According to the KoreanUnwed Mothers Support Network (KUMSN), an estimated 3.4% of single women aged 18 to 34 have experienced pregnancy, with nearly 85 to 96% opting to have an abortion and 70% of the women who give birth relinquish their child for adoption, with upwards of 50% of these children adopted abroad. According to the Ministry for Health, Welfare, and Family Affairs, about 6,000 to 10,000 babies are born out of wedlock every year in Korea. It is not an easy decision to be an unwed mother, as an interview with KUMFA member reveals. Unwed mothers may face intense social pressure, “During a job interview, they asked why I raise the child alone and who the father is. In Korean society, it’s impossible to avoid such questions, even though they are extremely private matters. Then, all I got was rejections." Sadly, this is not an isolated case and additional stories have been made available through KUMFA’s interview series.

Unlike low-income married families, single mothers and their children estranged from extended family cannot access adequate resources because social welfare policy requires reporting the resources of estranged relatives. However, government surveys also consistently report that (1) the future generation is less interested in traditional marriage and family structures, and (2) women in their twenties and thirties today are less interested in marriage. So while the government has invested significant resources to raise the birth rate among newlyweds and included low-income families in the welfare system, more and more single parent families dissolved as social, financial, and politic pressures pushed parents and children into relinquishment scenarios. The tendencies toward abortion among women who perceive a lack of realistic childrearing options cannot be so easily counted. Moreover, children raised by single parents continue to experience structural exclusion from society, resulting in poorer performance in school and the workforce. It is all too easy to blame this on single mothers, but in an economy that disfavors women generally, and with reports of unwed mothers being discriminately fired, many families may be in distress.

The government rightly points out that there is a huge crunch coming for Korea’s labor force, which will be all the more powerful given the rapidly rising elderly population and the lack of adequate social welfare services to care for this portion of the population. This is a time for policy action to preserve families and encourage the equal academic development of children born to single mothers. In addition to the policy recommendations and social attitude-shift called for by scholars and activists alike, both married and unmarried childrearing support systems need to be addressed. The state policies such as low-rent stipends and childcare and educational support stipends, which attempt to incentivize pregnancies among married couples, should not discriminate against single parents. The economic and political system requires reforms removing discrimination against women, so that women can choose from a variety of reproductive and marital outcomes rather than pressured choices between abortion, adoption, or single motherhood, which all currently carry heavy social stigma, meanwhile married motherhood is subject to consistent social, political and economic expectations and attendant pressures. With government energy focused on raising both the birth rate and a globally competitive labor market, there should be more effort devoted to caring for all prospective Korean parents, and especially the stigmatized unwed mothers that are estranged from their families yet left out of the social welfare system and regulated by a stigmatizing set of laws and social practices (which will be elaborated in a future post furthering this discussion).

For further information, the Korean Gender Cafe highly recommends downloading the TRACK-KoRoot-KUMFA-Dandelions joint NGO submission to the U.N. Universal Periodic Review, “Monitoring South Korean Intercountry and Domestic Adoption From a Human Rights Perspective." We also want to give a shout out to this student for her video statement on the subject!


Chang, KS and MY Song. 2010. “The stranded individualizer under compressed modernity:
South Korean women in individualization without individualism” The British Journal of Sociology 61(3).