If you haven't already seen MBC's The Shocking Reality About Relationships With Foreigners[1] please watch it before you read this post.

The best part of the parody video Shocking Report: Foreigners Dating Koreans Conspiracy! -- 충격보기: 외국인과 교제음모![2]   is the final interview which begins at 05:20 which reads “MBC’s recent broadcast included a hateful message toward foreigners, and insulted all Korean women in relationships with non-Koreans. It was both racist and sexist.” On March 29, 2012 the MBC program frequently described Korean women as “victims” and called for “protection” of Korean women from corrupt values. This discourse shows a patriarchal and discriminatory view of women’s sexuality and choices. Even the title of the broadcast casts a negative tone by using an insulting term to refer to women and capitalizes on inflammatory netizen posts about women ‘acting out of order’ (see Koreabang[3] for coverage of  these stories). These stories are an attempt by conservative voices to not only “protect” women but to stigmatize women who make choices that don’t conform to normative expectations about marriage, family or Korean society.

The following Wall Street Journal Korea[4] coverage clearly shows the sexist intent of the program’s producer:
“The producer responsible for the newsmagazine, who asked not to be named, said the story was pitched by an outside production firm, called All That Media, that’s one of seven MBC has been relying on for content since its journalists went on strike.
“When they presented the item, we thought it’s a kind of issue that had been talked about for a long time, Korean women dating American English teacher to learn English, [Comment: This assumes English is the only ‘acceptable excuse’ to choose to date a foreigner -CBM] and especially in Itaewon area,” he said, referring to a neighborhood that’s long been frequented by foreigners due in large part to its proximity to the U.S. army post.
“I don’t understand why foreigners get angry about the issue while they are living with their spouses and having no problem,” he said. “Foreigner-Korean women couples are living happily, but why are they angry over an issue that has nothing to do with them?” [Comment: Maybe because stigmatization hurts their public perception, just like in a Korean man sued over discrimination in advertisements that treat marriage migrant women like merchandise[5] or promise marriage migrants “wouldn’t run away”[6] -CBM]
He said the piece intended to portray “Korean women who are out of their sense and get involved in these kinds of affairs.” [Comment: The sexism is pretty clear here –CBM]
“We need to be awakened and try to change this culture,” [Or, prevent women from freely choosing? -CBM] he said. “We had no intention to disparage foreigners. We wouldn’t do a report about foreigner-Korean women couples who are living without any problem.” [Comment: Of course not, that kind of report wouldn’t stigmatize Korean women’s choices or discriminate against foreigners. –CBM]
The producer said one of MBC’s senior managers conveyed a complaint about the piece from a couple he knew in which the husband is American and wife is Korean. “His American friend got angry about the report,” the producer said. “I don’t understand why he would get angry if it’s not something he was involved in.”
The producer said the report adequately pointed out that problems occur in “only a few cases.” “It’s not like we should put a subtitle at the end of the video saying, ‘However, other foreigner-Korean women couples are living well off just like other couples,’” he said.”

The conversation about MBC provides an opportunity to comment on gender, race and exclusion in Korean society. The photo shared below was posted to a Facebook group that discusses the fallout from the MBC broadcast and shows the segregation of some establishments[7]: 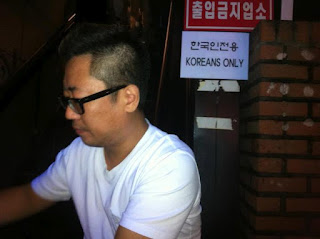 The National Human Rights Association of Korea[8] provides resources in English for filing a human rights complaint. The NHRAK recently supported a naturalized but non-ethnically Korean woman who had been barred entry to a Korean sauna, according to the Korea Times coverage, “A sauna employee refused to admit to the woman, a naturalized Korean, saying she was still a “foreigner” by appearance and foreign users may “make water in bathtub dirty” and “pass on AIDS.” Such an action was possible because there is no law on discrimination by race, according to a support center for immigrants[9].”One fascinating perspective on the intersection of gender and race in Korean society and law is captured by this quote by Sealing Cheng, the discourse of “sexual protection becomes the language through which women’s bodies, citizenship and national boundaries intersect[10].” While Korean women who partner with non-Koreans are stigmatized in the media, Korean policy actively promotes the marriage of Korean men with marriage migrant wives. Marriage migrant’s rights, according to Cheng , are protected only insofar as they fulfill the gendered roles proscribed by society by giving birth to a Korean citizen. The legal status of non-Korean children of marriage migrants is as yet unclear. These Korean laws provide an opportunity to see the patriarchal racialization of marriage at work. South Korean migration policies are not proactive on issues of sexism or racism, rather migration policy is largely a reaction by the state to economic needs without adequate policy to address the discrimination against migrants or mixed race couples.  Amidst growing calls for an Anti-Racism Law[11] perhaps we can anticipate a change in the future. Benojit Hussain[12] shares his story and the fight for the Anti-Racism Law in the linked video.

If interested in signing a petition requesting an apology for the MBC video, please follow this link[13].