Buzzfeed! Fearing rape is not a “Unique side effect of being an Indian girl”

Buzzfeed thinks that fearing rape is a “unique side effect of being an Indian girl.”
Today Buzzfeed posted two pieces about India. The first poked fun at English spelling mistakes in India. The second identifies and in some cases promotes some stereotypes about Indian women:
31 Unique Side Effects Of Being An Indian Girl

Among the list of stereotypes there is a troubling “joke” about rape that we want to discuss in items #4~5:

4. You regularly receive Facebook friend requests from middle-aged men in suburban India with whom you have zero mutual friends. 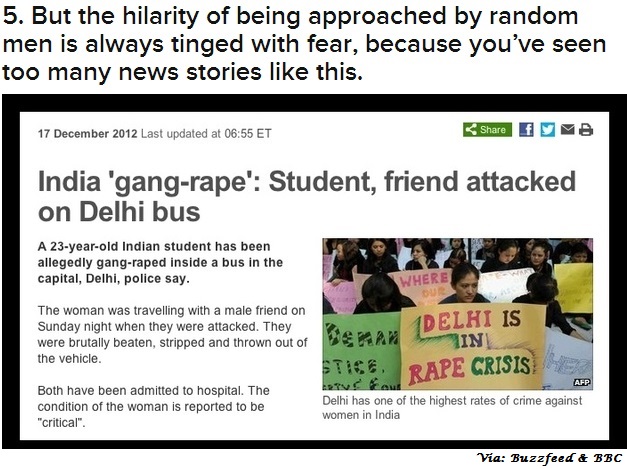 This joke trivializes two serious matters – street harassment and rape. I am not sure for whom it is typically ‘hilarious’ to be approached by random men, but I urge everyone to think carefully about fear and challenge street harassment. As the organizers of Hollaback in India demonstrate, we can educate ourselves and the public about street harassment.

Meanwhile, some criticize what may be disproportionate attention focused on rape in some countries, while ignoring or overlooking rape in other countries. We need to challenge rape cultures everywhere, but in the process we should not go so far as to label the fear of rape as a ‘UNIQUE' 'side-effect’ of being an Indian girl. In the FIRST place, sexualized violence is a global problem that we need to take on, hardly unique to India. In the SECOND place, it is deeply troubling to refer to rape fear as a mere ‘side-effect’ of being a girl/woman, as opposed to generally the result of inappropriate behaviors that we are condoning in boys/men by mis-attributing its cause. When we say that fear or rape is a result of being a girl/woman, we erase our ability to demand that we rethink our attitudes toward violence and sex, we ignore that rape is generally the result of a rapist/aggressor’s behavior and not at all attributable to the victim’s gender. FINALLY, this ‘joke’ tends to single out Indian men in particular as sexual predators, and I am very much looking forward to reflecting on this point in greater depth after reading Spivak’s “Can the Subaltern Speak.”

What do our readers think about the joke described above? Below we offer a few more jokes from Buzzfeed that may offer us a starting point for dialog around gender and women’s rights. Please share your thoughts in the comments section.

The running “joke” from point #7 to #11 identifies and trivializes issues surrounding marriage:

7. Speaking of your grandma, she asks if you’ve found a husband yet every time you talk…

8. And when you say no, she reminds you that she’s happy to find you one.

9. But the only thing you fear more than an arranged marriage is a Shaadi.com marriage.

10. Because you know wife-seekers have some unreasonable (albeit hilarious) demands.

11. Of course, at the end of the day, you’re free to marry whomever you want… Except the extensive list of races, religions, and nationalities your mom has vetoed.

Note: Among the ‘hilarious’ demands the site highlights this advertisement for marriage: “I want a girl with no drinks if she wants she can wear jeans in house but while stepping out of house she should give respect to our cast.”

27. You never had sex ed at school, so you learned about sex from questionable sources.

The newspaper clipping from a 26-year-old man asks if she should “slap that girl in public to take revenge” to which a columnist replies “I suggest you see a psychiatrist.”

Finally, in response to #28, I have to admit that it is impossible for me to eat just one Gulab Jamun. This is clearly not a “unique side-effect of being an Indian girl.”