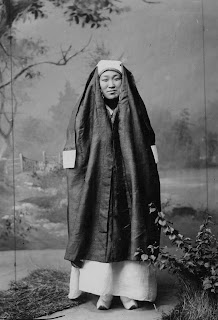 First, the laws regulating women’s public sphere participation increasingly limited the roles of women in the public, and even affected the visual representation of women. According to Lee, upper-class women were required to wear a hood when they left home, while middle or lower class women should don a shawl in public: 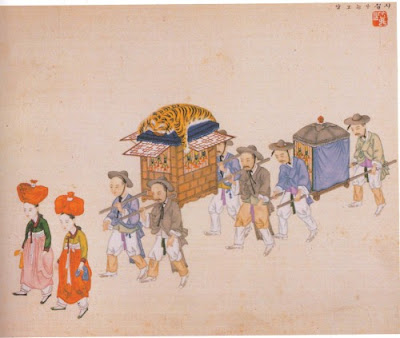 In addition,
“yangban women were forced to get around on horseback or in a palanquin and assure that their faces were never exposed to passersby. Such palanquins were also used by female entertainers whenever they left the house and palace women when the king would set out on a journey or get married (Han, 117).”

The regulation and demarcation of class, marriage status and gender has been a feature of many societies throughout history, always requiring the internalization of and conformity to a hierarchy. Thus, these laws not only regulate what is outside or inside the home, but also what is inside and outside the body or one’s mindset.

One comparison is contemporary debate over some Islamic traditions that require women to wear a veil. However, this practice has common roots throughout history and across many societies. According to Susan W. Schneider, in the Jewish faith a veil signified nobility and high social standing, so women of middle class background would don the veil to model elite Jewish society. Likewise in many Christian faiths there are traditions of head-covering. According to St. Paul, “A man ought not to cover his head, since he is the image and glory of God; but the woman is the glory of man. For man did not come from woman, but woman from man; neither was man created for woman, but woman for man. For this reason, and because of the angels, the woman ought to have a sign of authority on her head" (I Corinthians 11:3-10).” In the church of Latter Day Saints (LDS) some Mormons don a special undergarment that covers parts of the body to keep them from view. The common basis between Confucian, Islamic, Jewish, LDS and Christian thought is that the veil symbolically regulates women’s virtue, and also places them in a position subordinate to men.

Second, due to the philosophical link between a harmonious home life and public prosperity, the everyday life and responsibilities of yangban and some countryside posts or lower level official’s mothers, wives and daughters transformed to conform to high expectations of morality and hospitality for the social advancement of the family. Within the home, hosting guests and performing with skill in culinary preparation and overseeing entertainment held symbolism beyond merely rubbing elbows with high ranking officials, but represented the harmony and success of the household. Outside the home, strict conformity to one’s class status was demanded, with transgressions bringing shame to one’s family if not appropriately attired:
여자들은 남편의 벼슬이나 본가의 신부에 따라 역시 복장을 달리했다. 또한 양반여자들은 치마를 왼쪽으로 여며 입었는데 만일상민이 그렇게 입으면 망신을 당하고 쫓겨났다고 한다 (한국고문서학회, 210). 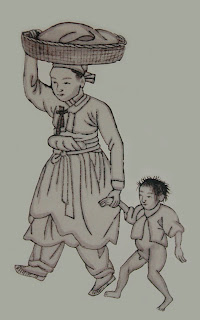 At the same time, conformity to the law would benefit one’s family:
“Women who preserved their chastity were rewarded in many different ways. For example, while women from the yangban class saw their families designated as honorable families, commoner families found themselves exempt from corvée labor. Meanwhile, in the case of the lowborn women, these were given the opportunity to gain commoner status (myŏnchŏn). Such awards placed extra pressure on women to maintain their virtue and to obey their parents and parents-in-law (Han, 118).”
Thus, women’s virtue could affect family prosperity, and a woman highly skilled in household management might project a powerful image of her spouse and family, extending into the public sphere by hosting guests.

The legacies of private-public division of men and women still resonate in politics today, in Korea and around the world. For example, how does the symbolism of the First Lady in America compare with the Choson philosophy toward inside-outside representation of the household head in political affairs? How (or rather, why) do Michelle Obama and Ann Romney reflect on their husband’s image, campaign success and leadership?