Asian Girlz Apologies: On Sincerity and Slut Shaming – 3 of 3

Just STOP slut-shaming Levy Tran!
IT is counter-productive, at best, to accuse the band Day Above Ground of sexism and racism and then go on to criticize Levy Tran for her choices about he own body, dress and behavior. What was her choice in this context? By dressing and performing in the music video she pursues her career as an actress and model. Did she contribute to writing the lyrics? No. Did she choose the camera angles or edit the film? No. Is she responsible for her own participation? Yes, and she has offered the most sincere apologies for Asian Girlz despite having the least creative control over the entire racist sexist mess that is this song and music video.

IT is no doubt challenging to have an ethical career as an actress or model, and accountabilty for mistakes is important, but let's not reinforce sexism by going after the actress and letting the director slide. Let’s re-examine the goals the band and director pursued:

according to an interview with Rabiah Khalid, who serves as the Avocacy Manager for AsianAmericans for Community Involvement.

Khalid spoke to the issue of sexual assault and harassment of Asian Americans in the U.S.

“People have groped them and it’s okay, because you’re an Asian women,we’ve been told this stuff,” Khalid said. “It would have been different if itwas another ethnic group,” she said. “I feel like media and everyone would havebeen on it right away.”

I appreciate Khalid's excellent points demonstrating the link between this video and everyday harassment of women.

SO far Levy Tran has offered a few apologies and there is likely more information about her opinion to come. In the meantime, here is an account of model Paige Morgan's decision-making and limited creative and editorial control over Vice Magazine spread shot by Annabel Mehran and editedby Annette Lamothe-Ramos and its' problematic portrayal of women authors who committed suicide.

"Unfortunately, in this industry, any sort of objection to a job is seen as you being 'difficult,' or you just purposefully creating 'drama.' No, I'm not 15. I don't have an agent. But there are other factors at work. And it's extremely easy to say, 'You should just walk, and find some other way to make money.' But I don't think we'd necessarily say that to anyone in a more regular job, faced with that sort of decision."

WHAT did Levy Tran do? She danced, she took a bath, she acted and undressed. Are these actions that women are not entitled to take? Are we not allowed to perform? Are we not allowed to make decisions about how to look, how to dress? Aren't we allowed to be sexy? Let's not confuse Levy Tran's creative choices with those made by the band and director - they are absolutely different.

“Remember- nobody’s perfect. Work hard and strive to be better than youwere yesterday. Study hard. Be kind. Tip the barista at your coffee shop. Opena door for a stranger. Let someone into your lane. Don’t speed in a residentialarea. Floss. Read a book. And please stop hating on other people. It only makesyou look bad. Say one positive thing about yourself in the mirror. Repeat “I amworthy!!!"

“I’m not perfect. I make mistakes. All I know is that I’m a good daughter. I’m a good person who is kind to people. I work hard. I keep reminding myself to not listen to the negative comments people say about me. No one will ever really know who I am unless I let them in. Just because I have a few provocative photos does not make me any less of a person. I’m a woman. I am ok with my sexuality. Most of my post have to do with food and fitness. Which is what I’m about. It’s taken a long time to build confidence and I’m not giving it up. To those of you who are still struggling to block out the negativity- stay strong. People say the meanest things sometime.”

“I am so excited. So grateful for a job. I am grateful for all thesupport from my family, friends, and followers. I am grateful for the food inmy belly, for the roof over my head, for the air in my lungs. I am happy. I amcontent. I don’t need much. I work to excel, not to be rich or famous. “Thebest way out is through"- Robert Frost. We all must go through our ups anddowns to appreciate the ups. Work hard. Be honest. And don’t be an asshole. :)”

“Love your body. Don’t hate it and wish it looked like someone else’sbody.”

IN an interview a few years ago she emphasized messages of confidence and definitely shows she is critical of degrading ideas:
(asked) What is one feature you wish you had more of?

“Man, are you sure you want to ask a girl this question?! This list could go on forever, but if I were to choose…I would have to say confidence. I wish I had more confidence in front of the camera.

(asked) In fire what would you save makeup/shoes/purses (only choose one & why)?

“This question is degrading.”

OTHERS are concerned about the image of Asian women. These commentators really play into slut-shaming because they deny the basic right of women to choose what to wear and how to behave. These attitudes are just as sexist as the stereotypes and objectification in the song and music video itself.

“The scantily clad actress in the video, by the way, is Levy Tran.”

It is unclear what the purpose of this footnote was, but the tone itself can come across as pretty sexist in slut-shaming Levy Tran. It is not clear enough whether AAM is critiquing the clothing in the context of the music video (which would be an art decision by the director) or whether he is criticizing Levy Tran for wearing this outfit. It seems more likely that the emphasis is a criticism of Levy Tran herself, since AAM is identifying her, and never identified the director of the video. With this choice, AAM moves from criticizing the song and video and starts off a round of slut-shaming Levy Tran.


This statement by *F___ shocked me because of it's direct and unapologetic slut-shaming. 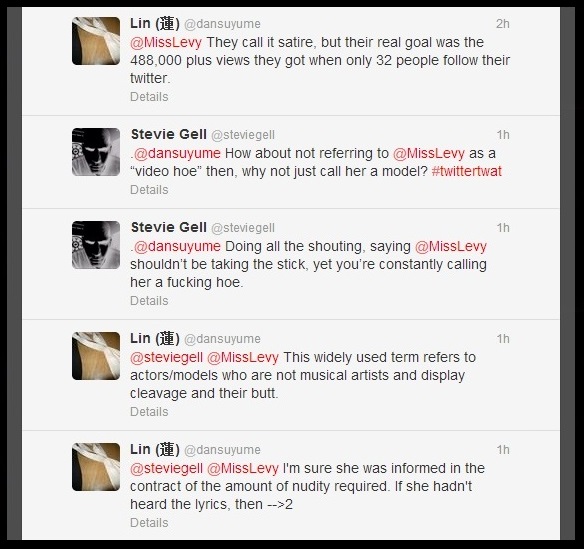 I think the debate here between @steviegell and @dansuyume starts to point out the problematic position occupied by some netizens who call out the music video as sexist, but then deploy sexist rhetoric and attitudes against Tran.

TO conclude, while the director is unwilling to reconsider his video scripting and his objectifying camera angles, the band is unwilling to do the work of reflecting on their mistakes. In contrast, Levy Tran's apology is the most sincere, and at the same time the most upsetting. Her apology upsets me because it reflects the sexist attacks of the online and media communities. Why is there such harsh shaming? It is clear from her work that she wants to promote body acceptance and self-love, these are both great messages. So she picked a project that is out of step with those messages, she has apologized and accepted responsibility for her role. At the same time, have WE been held accountable for slut-shaming her?

BY slut-shaming Levy Tran, we take up a role reinforcing racist and sexist views about Asian women. We participate in socially policing her behavior, appearance, clothing and body. We say that while the band and the director don't have a right to 'use' her body or make racist and sexist statements, WE do have the right to say that her body should be covered up, her apologies are not enough, she has shamed us all by not conforming to the role WE give her and the behavior WE demand. It is enough to challenge her to rethink the meaning and significance of the project.

Read our other posts in this series on Asian Girlz Apologies:
Part 1 critiques the problematic racism and sexism in Day Above Ground's lyrics and apology
Part 2 takes on the creative decisions by Director Michael Steinberg visualizing racism and sexism and calling it 'Art'
Posted by Unknown at 07:06