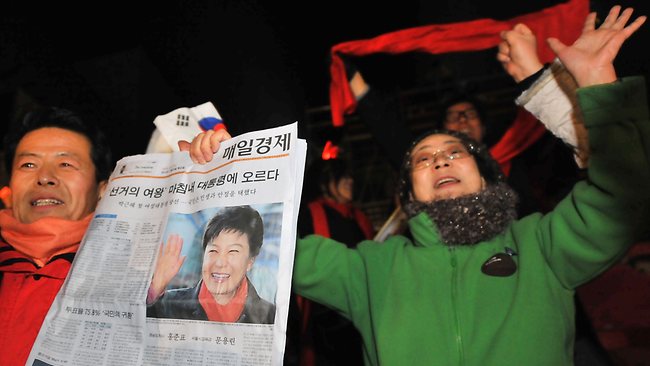 The Korea Times ran a piece "Skirt on inaugural day" yesterday, discussing what outfit President-elect Park Geun-hye should wear to her Feb. 25, 2013 inauguration. In the piece, Rachel Lee summarizes fashion tips from experts that “have come forth with suggestions on how to navigate the complex relationship between power and clothes.”
Since when is there a COMPLEX relationship between power and clothes? Who cares about this?  Earlier this year when U.S. Secretary of State Hilary Clinton was scrutinized for her fashion and cosmetic choices, Celinda Lake pointed out that:

“evaluation of women on their looks is driven by news media, not voters. "What is just absolutely amazing is how pervasive this is and how true it is even for women reporters and the degree to which even if women try to develop just a uniform for the job we can't seem to get off this topic," she says. In focus groups, "I haven't heard anyone mention her hair or her makeup for probably a decade. It's not the voters driving this at all. They could care less. It is reporters. It is both male and female reporters."

I wonder whether the average Korean citizen cares whether Park wears a skirt in the right color on Feb. 25, 2013?

Thank you so very much, Korea Times, for telling us that “the president-elect, with her power suits and coiffed hair, portrays an image of veteran politician with aplomb in the male-dominated political arena.” I suppose this shouldn’t be too surprising given the Saenuridang slogan ‘Prepared Woman President” while critics have said she is a female political leader "only in biological terms" because "for the past 15 years, Park has shown little visible effort to help women in politics or anywhere else as a policymaker." This dialog about Park's performance of gender, criticism of her femininity and womanhood - all of this seems to create a mold and expected role for women in politics. Supporters and critics alike narrow-mindedly link gender and politics as if genitalia pre-disposed one to a policy agenda.

I guess we couldn’t look to her long years of political office-holding to see that she is a veteran, her successful election, or her prominence within her party to see her confidence or aplomb as a politician… no we had better take a look at her fashion and hair style… or maybe we can do a little better and stop imposing an absurd double-standard on woman politicians.