Let's discuss why Psy highlights women and women's dance moves in his recent music video. For more of our analysis on Psy, see our pieces on 강남 스타일 Gangnam Style and 오빤 딱 내 스타일 Oppa, you're my style


Some early critics posited that “the video appears to show Psy playing tricks on women he's dating, until he meets a woman who is as tricky as he is. Except, that's not what the song is about.”

But... then they didn't offer an interpretation of the video, so we will!

Is this music video a fantasy of what we would really LIKE to do, but we will never do because we would shame ourselves? Does it mean that there is no real ‘gentleman’ on the South Korean dating scene? Is Psy once again poking fun at pretentious behaviors of the young and rich?


First, our Guide to Gentleman. We will attempt to decode the allusions and jokes you might be missing.

Guide to Psy’s Gentleman Music Video
The music video opens with Psy and a group of older men carrying shopping bags. We interpret this as a nod to consumerist dating, in particular the gifts that men will purchase for their dates. 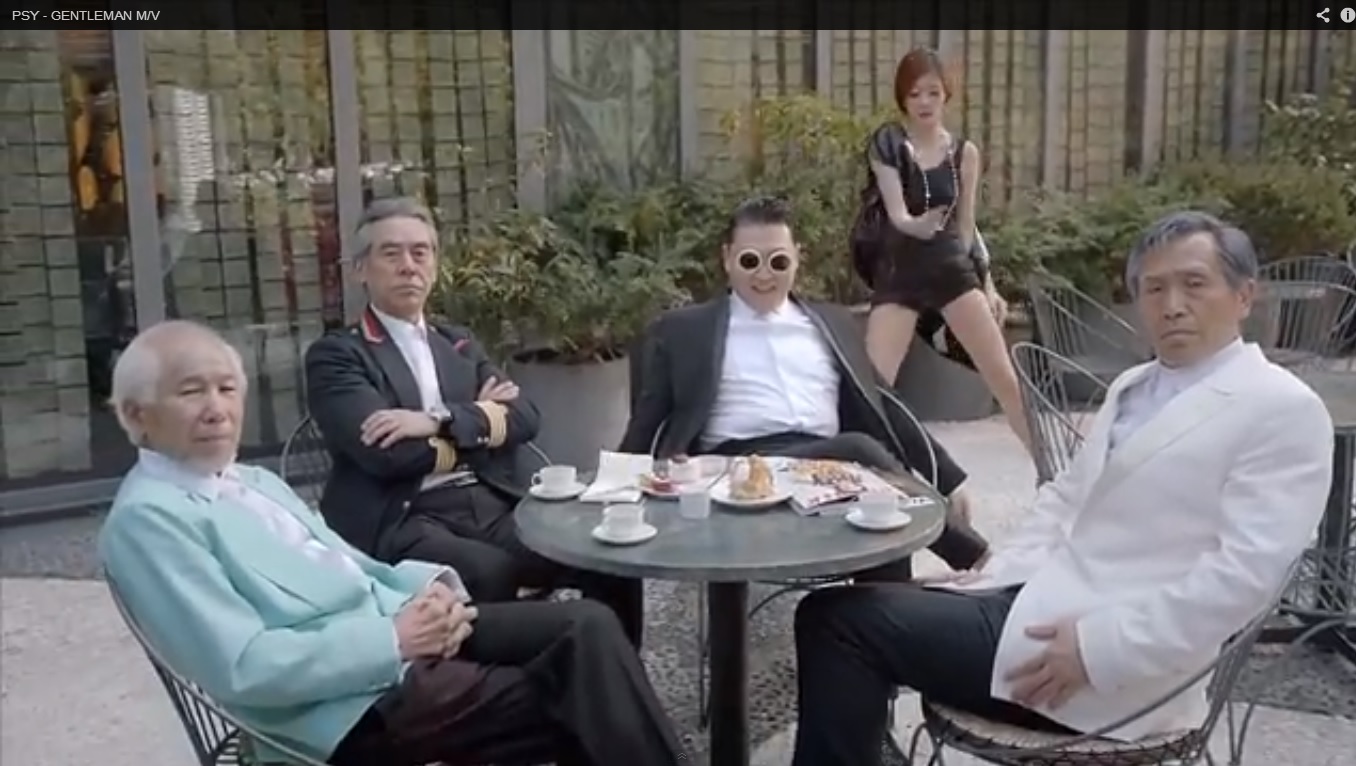 0:24 Psy sits drinking coffee with three older ‘gentlemen’ while a woman dances in the background. Although the scene is set outside, we think this could be bringing to light the 다방 Dabang / 룸사롱 Room Salon commercialized sex industry. 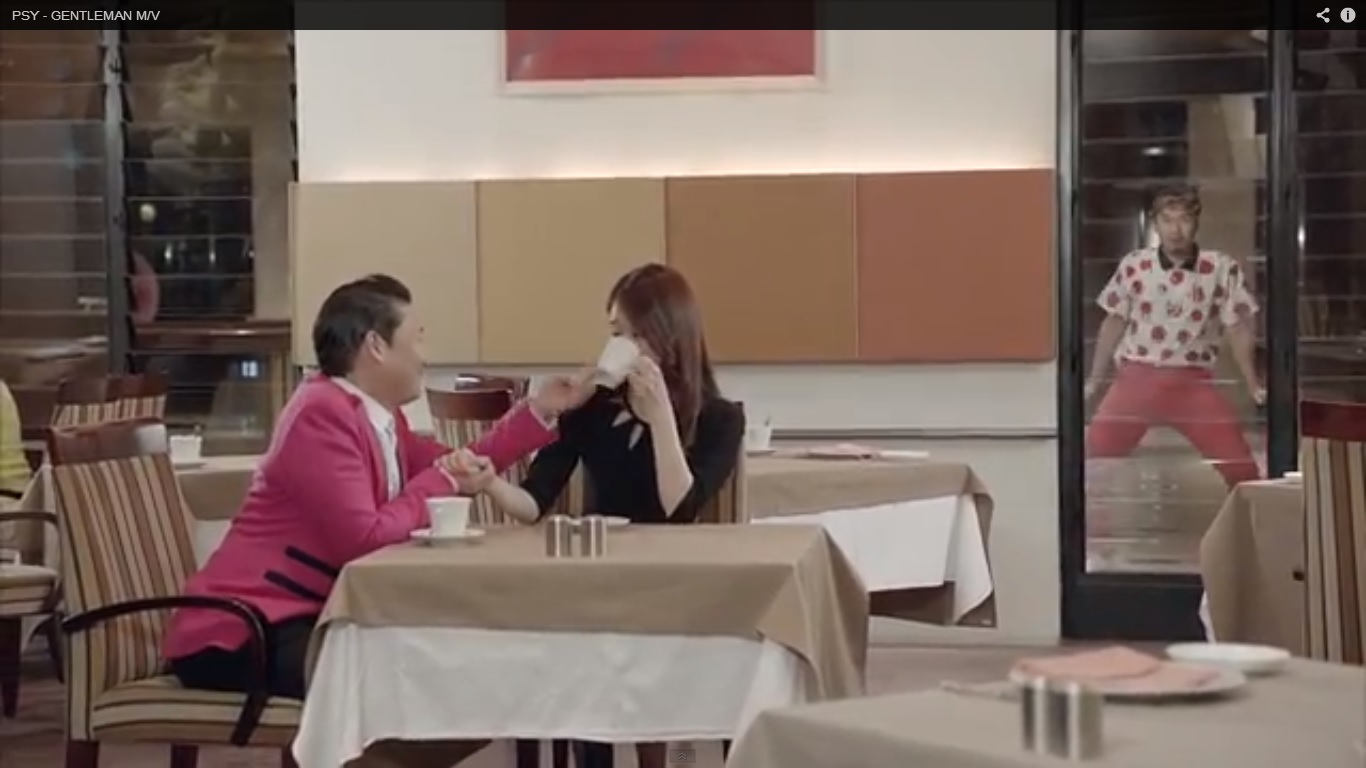 0:44 Psy pushes a coffee cup into the face of his date. We think maybe Psy is also poking fun at the 된장녀 Bean Paste Girl attitude and men’s internal attitude toward women they perceive as being Bean Paste Girls. 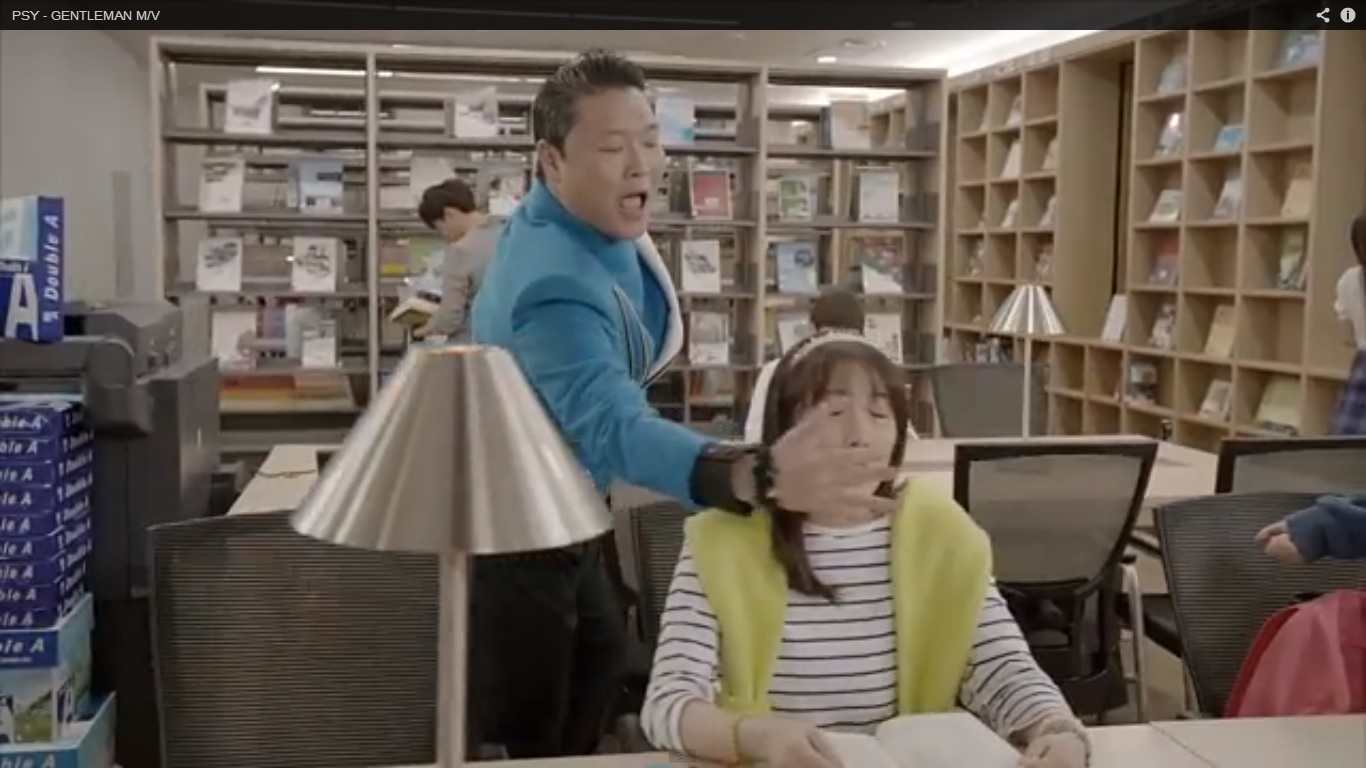 0:59 This scene is shot in Seoul Library. Psy farts into his hand and rubs it in a student’s face. We think the scene is a prank pulled on the pretention of studying. 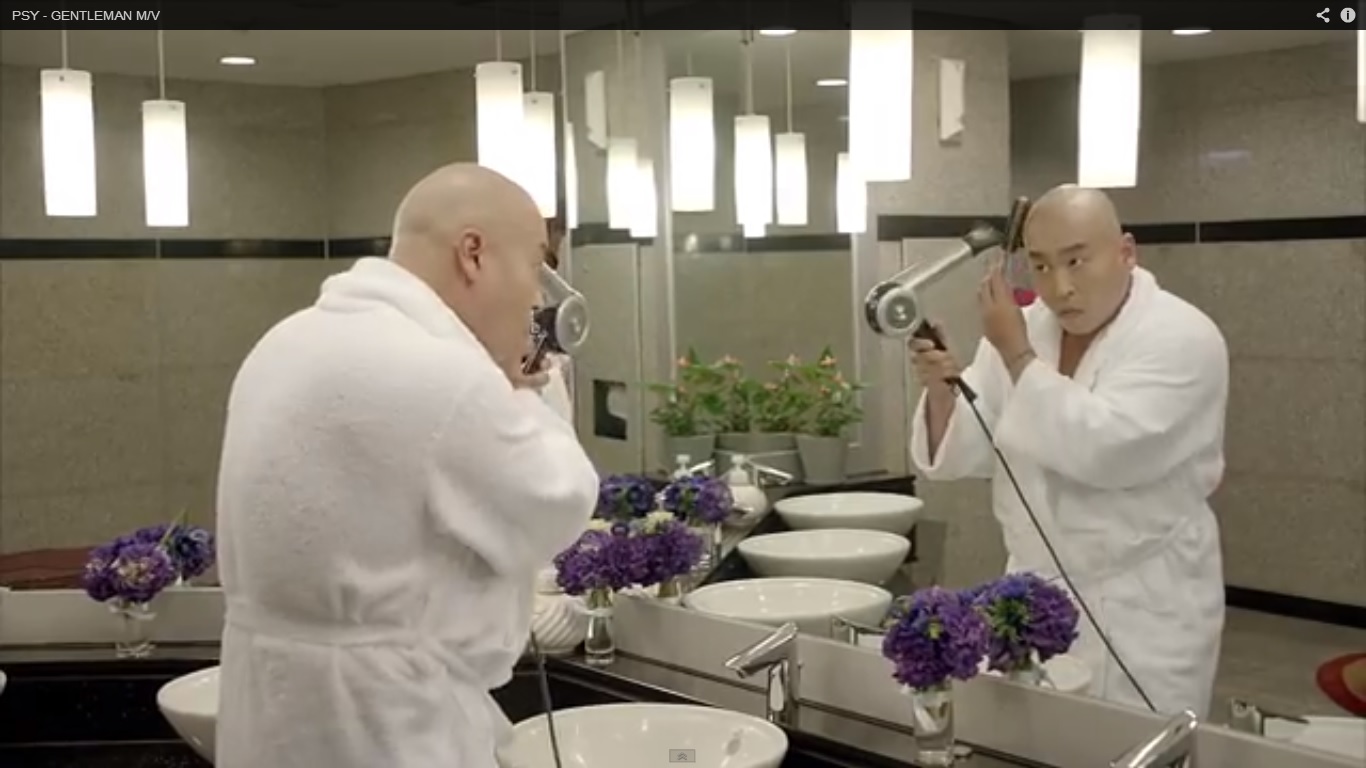 1:20 Who could be more pretentious than a bald man blow-drying his hair?

1:30: Even the waiter gets in on the action, exposing his inner disdain for pretentious customers in the fancy restaurant. 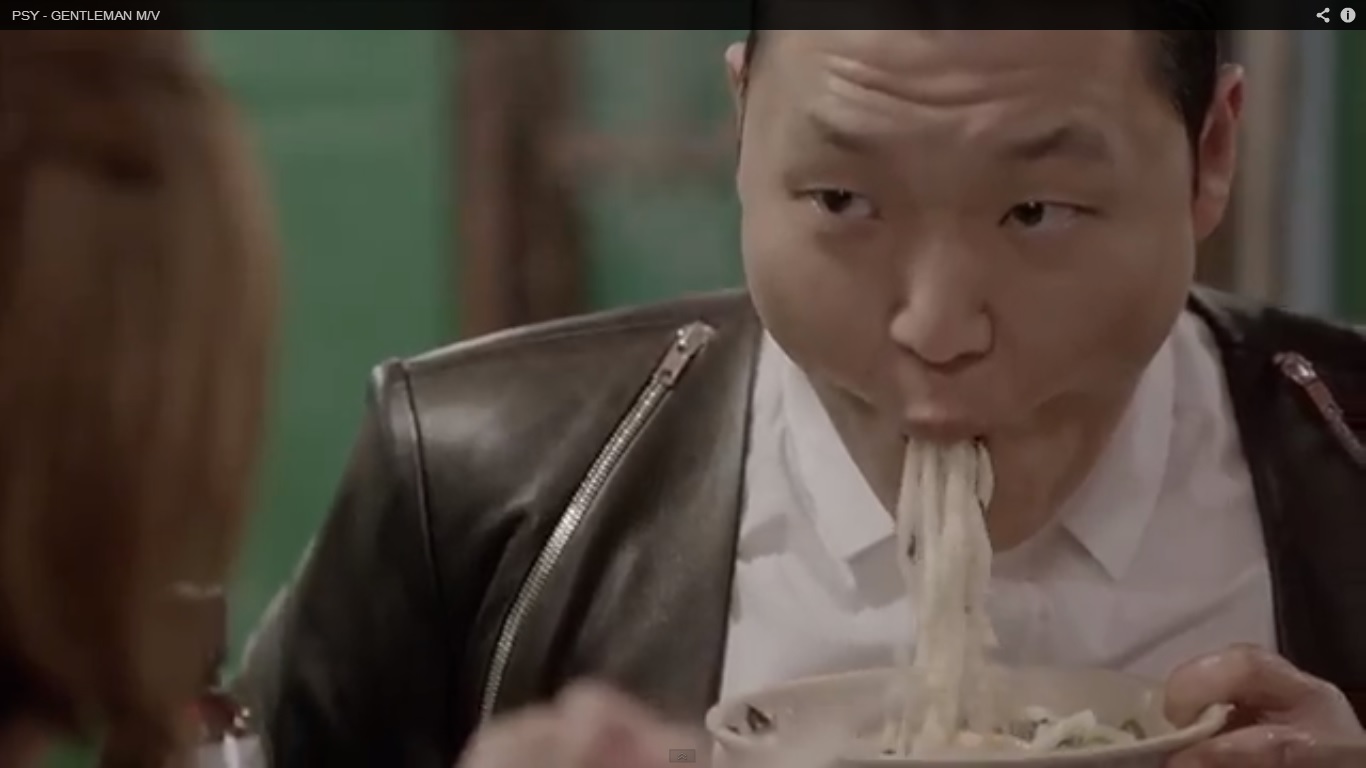 1:50 Ga In of Brown Eyed Girls turns the tables on Psy, knocking out his hair. The setting is interesting, they have a first date not in a fancy restaurant but at a포장마차, a common cheap pop-up sidewalk diner. This is why the noodle scene is so funny, rather than spaghetti at a fancy Italian restaurant, they slurp cheap noodles. 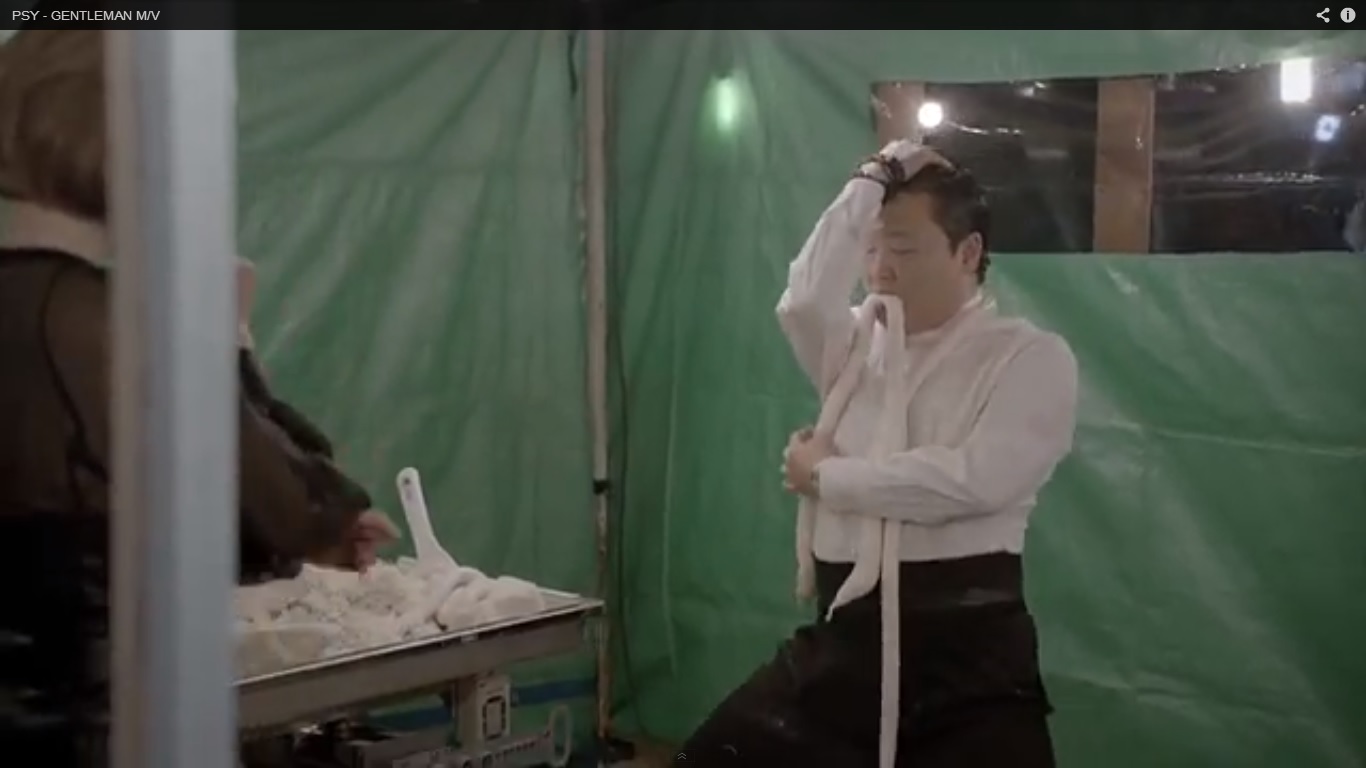 1:53 Psy dances and bites a roll of uncut 떡 rice cake. This is because this rice cake is used as slang or euphemism for sex because of the noise made by cutting the rice cake into slices for soup, and because in the old days it was made by hammering rice. Psy’s sexual innuendo is heavy in this scene, and he caps it by shaking explosive bottles of beer, not unlike many female Kpop stars in commercials.

The DANCE: This dance is sometimes referred to as 시건방 춤 and has an impertinent or cocky attitude, th e audience might feel judged as the dance looks down on them while they watch the dance.

UPDATE: In the closing scene, Psy is 'pole-dancing' at an intersection in Hallyu World. Professor 이택광 points out that he is ridiculing hallyu with satire:

Commenter crazyno pointed this out: "Psy is known as "wet psy" because he guested on a popular TV variety show (which the main cast from this MV are made up of--Immortal Song (IS)) and he lifted his arms up and there was a massively wet armpit. in the music video there is a clip shown at the 2:35 mark!"


Discussion:
What significance can we attach to Psy's decision to perform traditionally female Kpop  dance movements? I'm not quite sure what to make of it, but it puts me in mind of Roald Maliangkay's The Bra Boys of South Korea.